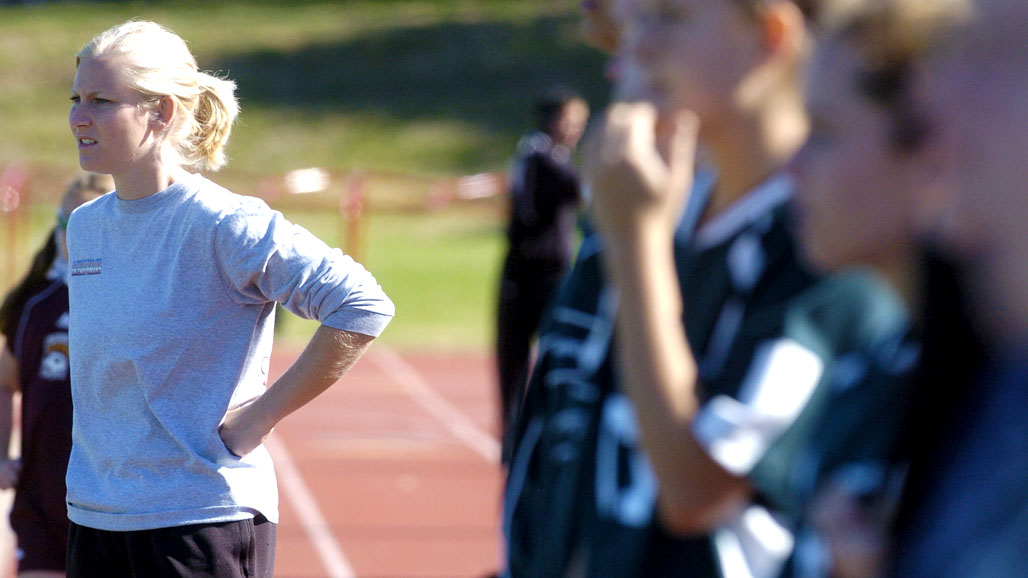 The AFA Fillies are excited to announce Lori Khazen as Technical Director for the club, effective immediately. Lori brings a unique skill set to the club, offering not only technical training but injury prevention and strength and conditioning expertise. "Being a large part of an all-girls soccer club is something that I’ve envisioned after years of working with many female athletes, particularly those from soccer clubs all over St. Louis. I look forward to this next chapter with the AFA Fillies, bringing a strong combination of injury prevention strategies, technical training program design, execution and supporting the already stellar coaches in the club’s philosophy of guiding these young women to great things.”

Growing up in Quincy, Illinois, Lori (Thomas) Khazen was the youngest in a line of seven athletic children. Excelling at soccer, volleyball, gymnastics, and dance, she was a 3-sport athlete at Quincy Notre Dame High School (‘95), but focused on soccer when she attended Washington University in St. Louis (‘99). A four year starter for the Bears, Lori holds the school’s season record (‘98) for goals (31), assists (16), points (78), and game-winning goals (9). She ranks 2nd in career goals (71), assists (38) and points (180). As a freshman in the 1995 season, she led her team to the school’s first University Athletic Association (UAA) conference championship and NCAA tournament appearance. Then, in 1997 & 1998, Lori led the team to NCAA 3rd & 5th place finishes, respectively. She was a 4-time all-UAA Conference & 4-time allRegion selection, and was named UAA Conference Player of the Year in 1998. Lori was awarded by Chancellor Wrighton Wash U’s prestigious W. Alfred Hayes Award for outstanding leadership in athletics when she graduated.

In the Pre-Physical Therapy curriculum at Wash U, she earned her degree in Psychology in 1999 but realized her love of athletics and desire for a career in health care could be combined in the field of sports medicine. In 2002, she received her master’s degree from Illinois State University’s Department of Kinesiology and Recreation, specializing in athletic training. As a graduate assistant at Illinois Wesleyan University, she also started her collegiate soccer coaching career, assisting then head coach Dave Barrett.

Returning to St. Louis in 2002, Lori gained additional experience in outpatient rehabilitation clinics and strength and conditioning facilities, and continued her collegiate coaching career, this time at her alma mater. Assisting then head coach Wendy Dillinger (‘02-‘07) and current head coach Jim Conlon (‘08), Lori focused on the technical game of the attackers while designing and instructing the year-long strength & conditioning program. During her tenure at Wash U, in 2004, she realized a dream of playing semi-professional soccer with the St. Louis Archers, and in 2005 realized another dream of starting her own business practice, Khazen AthletiKare (KAK).

Lori combines her athletic training and strength & conditioning certifications with years of experience with youth, high school, collegiate, and adult elite and recreational athletes. In 2006, Lori was honored to be inducted in the Hall of Fame of both Quincy Notre Dame and Washington University in her first eligible years. In 2009, via Khazen AthletiKare (KAK), Lori accepted the position of athletic trainer for Webster University’s men & women’s soccer programs. In the subsequent 5 seasons, she was an integral part of the sports medicine team, heading up injury
prevention, early injury recognition, rehab and return to play programs for the Gorloks. In 2014, Lori transitioned into the role of Assistant Coach for the Webster U Women using her unique skill set to guide the female athletes to be the best version of themselves…healthy, happy, and motivated to compete for their school, while preparing them for their next steps into “the real world”. Lori has a strong hand in player development through technical training and strength & conditioning program design & instruction.

Lori will continue her role on the Webster U staff, but now will bring her unique skill set with KAK to the AFA Fillies Soccer Club as the newly-named Technical Director. Lori is married to her college sweetheart, Pete Khazen, and they have 5 children…Emary (12) (AFA Fillies ’07 Zenyattas), Gabriel (11), Christian (8), and twins Tate & Quinn (3).